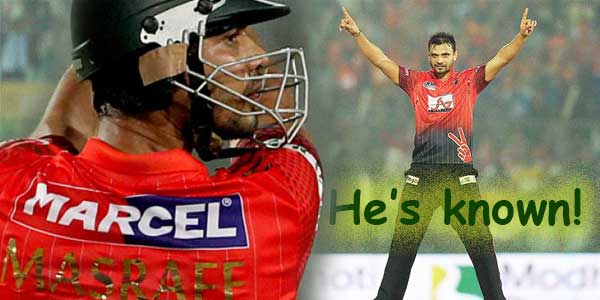 He might be the most successful captain Bangladesh has ever produced in limited-overs cricket but at the moment, Mashrafe Bin Mortaza is in a bit of a pickle.

Comilla Victorians, the reigning champions of the Bangladesh Premier League, are the only side that have not managed a single win in the BPL this season and so their skipper Mashrafe now finds himself under pressure.

“Life isn’t always the same,” said Mashrafe, with a smile, while speaking to reporters in Chittagong yesterday ahead of his team’s crucial clash against the Rangpur Riders scheduled to take place today.

“There are times when you have to overcome difficult moments. No matter how well I have done in the past, honestly speaking I don’t think about that. This is a new tournament and a new situation, let’s see what happens,” he added.

Mashrafe has always been one of those players who rate the value of Tests and ODIs ahead of the T20 format. Whenever he speaks on the topic, he tends to acclaim the versions apart from T20 cricket.

That philosophy however has not softened the blow that his team has suffered since the start of the tournament.

“I always feel that everyone should enjoy T20 cricket. After all, it is entertaining for everyone. But still when your team loses, it obviously feels bad as a player.

“I feel that in T20 cricket a batsman may get out in the first ball. It’s difficult to analyse players in this format. So to me, I think the more you enjoy T20 cricket the less pressure you take on,” explained Mashrafe.

Unlike last year, the Comilla Victorians have not gelled as a team yet. It was a combination of performances that had led them to the title last year. This year however has been the opposite, with none of the players managing to follow a plan.

Mashrafe reckons that the burden of expectations has gotten the better of his colleagues.

“Right from the start of the league there was a lot of expectation from the players. It’s obvious because we won the competition last time. But we didn’t even manage to go close in any of the games [this time].

The Bangladesh captain also reckons that the Victorians need just one win to change their fortunes.

“I don’t think we can try anything new. We have a set number of players and if they don’t perform then there is no point of trying something new. Just like other teams we do have weak areas. But we have to overcome that like everyone else have.  What we need right now is one win. In tournaments like these, one win can clear your head,” concluded Mashrafe.